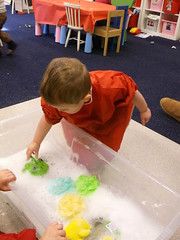 Babies have been kindly donated a play kitchen this week by one of our old parents. When it was first put in the baby room they all eyed it warily as if it was going to do something on its own. When however they realised that it wasn't going to move across the room to them they all started to approach it and it wasn't long before with the key persons support they were pretending to make cups of tea and cook and even started to pretend to feed each other mimicking the staff much to their amusement.

Bubbles of all sorts of sizes were the order of the week, the more the merrier and the bigger the better and the children delighted in watching them float and saying the word â€˜pop' as they poked them with their fingers and they disappeared into thin air.

They had great fun with the plastic balls rolling them around and trying to hold them in their tiny hands without dropping them, one child managed to pick up three until she dropped one and then dropped another one when picking that up and so it went on but the look of pride on her face when she finally had all three in her arms again was priceless until she got distracted by the soft play and dropped all three on the journey to explore the mountainous soft steps and crawl throught the long never ending tunnels. 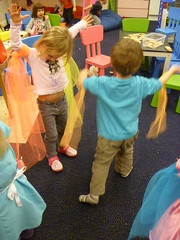 Jungle have been making play doh on sticks this week and the children have been pretending they are ice creams and lollys. Like ice creams and lollies they fell off their sticks quite quickly to the childrens amusement so they soon turned them into ball like creatures that rolled around the table and sausages for the home corner so the next day we extended this activity by providing pots and pans and utensils for the play dough and the result was lots more sausages and quite a lot of pizza!

Music and dance has been a big part of their physical learning this week and they were having lots of fun dancing to music with balloons and started to imitate the balloons with floaty movements to the music and that was just the staff! The children copied their movements and we soon had a musical follow my leader game going on which all enjoyed.

Castle have turned their home corner into the bears cottage this week for the story of Goldilocks. I was even invited in there for some porridge in mummy bears bowl. I was told daddy bears bowl was too big for me! They had great fun acting out the story and were able to remember it and retell it. We then had a puppet show in there through the cottage window which captivated the others.

The tuft tray was turned into the bear hunt with lots of grass and twigs and water for them to slosh through and hidden in the greenery were small bears which they had great fun finding.

They have been experimenting by painting with different objects such as bottle tops and used various colours to decorate their bear faces some took the bottle tops off to do this and others kept the tops on so that they could use the plastic bottle to hold it and use it as a stamp.

Their favourite game this week is Honey bear which they are asking to play every day, for those of you that don't know how to play it the children sit in a circle and one child pretends to be the bear asleep in the middle and by his side he has a jar of honey. A child is chosen to creep into the middle and take the honey and then the bear wakes up and has to guess who has the honey behind their back. This is all done to a repetitive rhyme which Im sure the children will share with you if you ask them and then you wont be able to get it out of your head either! This activity promotes good listening, turn taking and good waiting skills and most of all its fun so why not try it at home.