Some Fun in August Sun 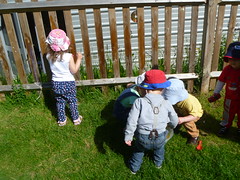 In August our babies have been dancing, getting messy and making lots of fun sounds. Nothing new there then!

What is new however was the fantastic sensory trays that they were given to explore with their feet! Each tray had a different sensory experience from shredded paper to oats and wet sand and the babies were helped to stand in each one and explore with their feet. The result was a varied range of responses and reactions, some were willing to have a go at this new experience with support of their keyperson and wanted to repeat the experience, others watched warily to see the others reaction before trying it themselves and others refused to try it all of which you would expect from this age group.

Another favourite of our babies was the song box where they sat with their keypeople on the floor and chose puppets that represent songs they are familiar with and could join in using sound and gesture listening to and enjoying the rhythmic patterns in the rhymes and songs.

Our babies have also been experimenting and learning to mark make with crayons. They enjoyed making their mark on big pieces of paper making connections between their movement and the marks they make and when occasionally they went off the paper onto the laminate they enjoyed cleaning it off too.

The soft play remained out as it continues to be a popular feature with our babies and we have replaced the big cardboard box with a large soft cushion that they have enjoyed launching themselves on from the soft play providing them with a range of large play equipment that can be used in different ways encouraging them to climb confidently and safely. They also have to wait their turn for this with adult support in order to prevent any collisions!

We have had lots of sensory objects out for them to explore , pull, squeeze and hold encouraging them to grasp and feel different textures and lots of bubbles which they all adore and watch in complete amazement as they float up into the air and then just disappear this was accompanied by their song box and one of our all time favourite songs Tiny Tim where they attempt to clap on the word pop.

We have been learning to build and stack with soft bricks which are great fun to knock down again and in the garden we turned our tuff tray into a car wash which the babies loved and made lots of new sounds to represent the cars and the whooshing water as it went over them. 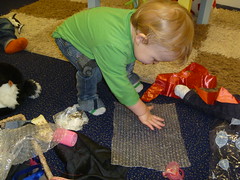 Jungle room repeated the same sensory tray activity with their toddlers and got completely different results. All of the children were keen to have a go and join and to share the experience. When standing in the trays they were really exploring the texture with their feet, especially the jelly which they said they were paddling in and when they no longer wanted to explore with their feet they sat down next to the trays and explored with their hands and extended the play by putting toy objects in them and continuing to play, so it was all agreed this was a success that will be repeated only maybe next time in the garden!

They also continued with their under the sea theme and made fish from their own painted finger prints which led to lots of hand printing and experimenting and exploring the paint with other tools such as brushes and stampers.

They have also been learning to explore their physical ability in the garden using rubber tyres and planks , crates and haystacks to build various creations for them to experiment with different ways of moving, balancing and climbing.

The theme has been under the sea and we have been making fantastic sea scapes with sand textured paint to represent this and made some great salt dough models of sea creatures of the children's choice and they will be painting them shortly with bright colours of their choice and then you will be able to take them home to be pride of place on your ornament shelf.

You will probably also be receiving our recycled cardboard roll fishes that have been cut out by the children themselves to encourage them to use tools safely and I think you will be impressed, I know I was. 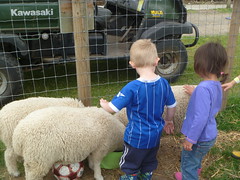 Hay, hay and more hay! One of the parents just commented that it looks like a farm in there which means we achieved what we set out to do. Thanks to one of the grandads we have had delivered two real bales of hay and are still hoovering up now to prove it. However it has all been worth it as the children have had a fantastic time pretending to milk the cow with gloves for udders and tasting different milks and cheeses. To all our surprise goats milk came out the clear winner and they made their own graph to prove it which you can see on the wall.

We also made some lovely gloopy mud for the animals to slosh around in and made some realistic animals out of play doh.

We also had some really important visitors this week but my lips are sealed until further notice.

They have continued with the animal theme this week in Castle and have moved on to jungle animals.

The children have enjoyed walking around with animal masks on and imitating the sounds they make and asking me to guess who is underneath the mask.

They have been learning to understand the world better with the map on the wall and talking about the animals where they come from and what they eat and then sticking a picture of the animal on the part of the map where it lives. The children were able to tell me what they had learned later on that day in the garden and show me the animals they had talked about by pairing up pieces of lego with the picture on.

Last but not least I would like to say a big thank you to the parent that arranged for the reptiles to be brought in. The children were enthralled by them and were able to tell me everything about them especially the water dragon that eats crickets apparently!